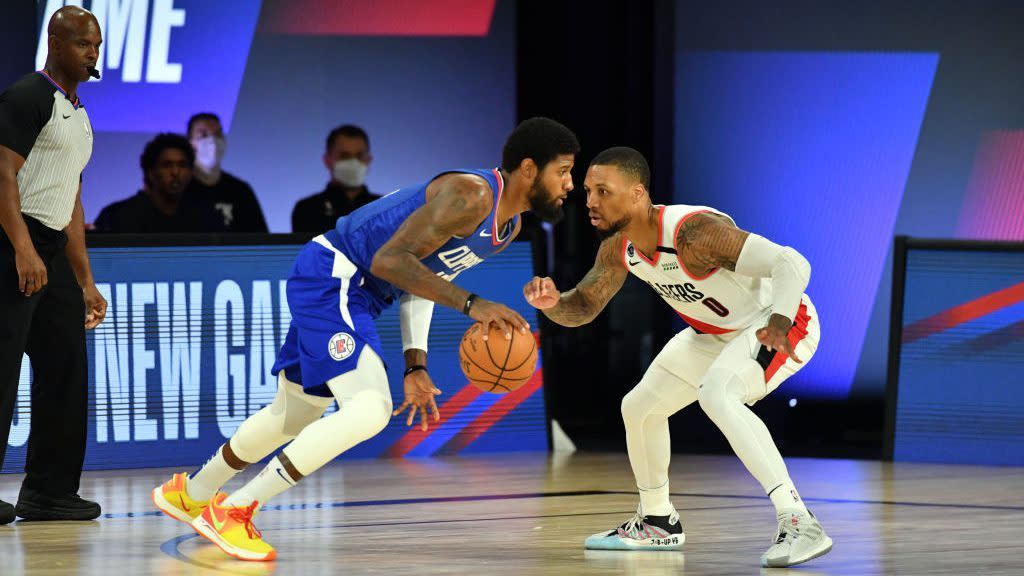 Damian Lillard missed a pair of clutch free throws in the Trail Blazers’ loss to the Clippers today. Patrick Beverley and Paul George let Lillard hear about it. Lillard boasted in his post-game interview about his series-winning shots over Beverley’s Rockets in 2014 and George’s Thunder in 2019 (which literally came over George).

And you getting sent home this year 🤣 respect✊

keep switching teams … running from the grind . You boys is chumps

Though Lillard’s Trail Blazers peaked in the 2019 Western Conference finals, they got swept by the team that lost in the NBA Finals.

But George forced his way out of Indiana despite that being the only place he could earn a super-max contract. He also re-signed with the Thunder, announcing his plan at a big party thrown by Russell Westbrook, then requested a trade to join Kawhi Leonard on the Clippers only a year later.

Lillard just has different sensibilities. He said he’d stick with the Trail Blazers rather than join a super team. Lillard even talked disparagingly about players who get pressured into bypassing super-max contracts in order to be viewed as a winner elsewhere.

So, this clash makes sense.

Maybe it got too personal for George, who has overcome major injury and returned even better. He surely doesn’t want to be called a chump at this point in his career.

But I disagree with George’s championships-only argument. There is plenty of room for major achievements that fall short of a title – like the Pacers’ deep playoff runs George cited. And Lillard’s series-winning shot last year. George was the casualty on that play. There’s no way around it, and it’s likely still a sore spot. That was a high-profile moment that supersedes missed free throws in a seeding game.

Lillard and George can go back-and-forth about their accomplishments. Both have done plenty in this league. Their individual routes to success show their contrasting values. Neither are wrong. They’re just different.

That’s perfectly fine and – when it leads to spats like this – fun.