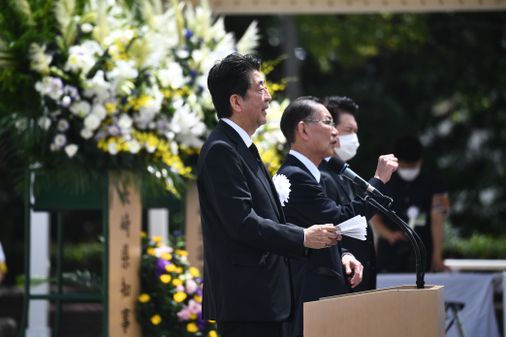 TOKYO — The Japanese city of Nagasaki on Sunday marked its 75th anniversary of the US atomic bombing, with the mayor and dwindling survivors urging world leaders including their own to do more for a nuclear weapons ban.

At the event at Nagasaki Peace Park, scaled down because of the coronavirus pandemic, Mayor Tomihisa Taue read a peace declaration in which he raised concern that nuclear states had in recent years retreated from disarmament efforts.

Instead, they are upgrading and miniaturizing nuclear weapons for easier use, he said. Taue singled out the US and Russia for increasing risks by scrapping the Intermediate-Range Nuclear Forces Treaty.

“As a result, the threat of nuclear weapons being used is increasingly becoming real,” Taue said.

He said that “the true horror of nuclear weapons has not yet been adequately conveyed to the world at large” despite struggle and efforts by hibakusha, or atomic bombing survivors, to make Nagasaki the last place of the tragedy.

He also urged Japan’s government and lawmakers to quickly sign the 2017 Treaty on the Prohibition of Nuclear Weapons.

Prime Minister Shinzo Abe has repeatedly refused to sign the treaty, saying Japan’s approach is not to take sides but to serve as a bridge between nuclear and non-nuclear states to encourage dialogue to achieve a total nuclear ban. Survivors and pacifist groups say Japan is virtually siding with the US and other nuclear states.

“Among the nuclear-weapon states and countries under the nuclear umbrella, there have been voices stating that it is too early for such a treaty. That is not so,” Taue said. “Nuclear arms reductions are far too late in coming.”

While Tokyo renounces its own possession, production or hosting of nuclear weapons, as a US ally Japan hosts 50,000 American troops and is protected by the US nuclear umbrella. The post-WWII security arrangement complicates the push to get Japan to sign the treaty as it beefs up its own military to deal with threats from North Korea and China, among others.

An aging group of survivors have expressed a growing sense of urgency to tell their stories, in hopes of reaching younger generations to continue their effort toward establishing a nuclear-free world.

Many peace events, including survivors’ talks leading up to the anniversary, were canceled because of the coronavirus, but some survivors have teamed up with students and pacifist groups to speak at online events.