In recent months, APH has keyed in on the Austin metropolitan area’s seven-day moving average of coronavirus-related hospital admissions when gauging public risk. While Travis County’s risk is still classified as Stage 4, or the second-highest tier of risk, seven-day moving averages of hospital admissions have consistently fallen in the Stage 3 zone for around two weeks. Currently, the average is 33 new admissions per day.

However, Dr. Mark Escott, the Austin-Travis County interim health authority, told county commissioners at an Aug. 11 meeting that the rate at which residents test positive for the virus could be a “better and earlier” indicator of coming trends. 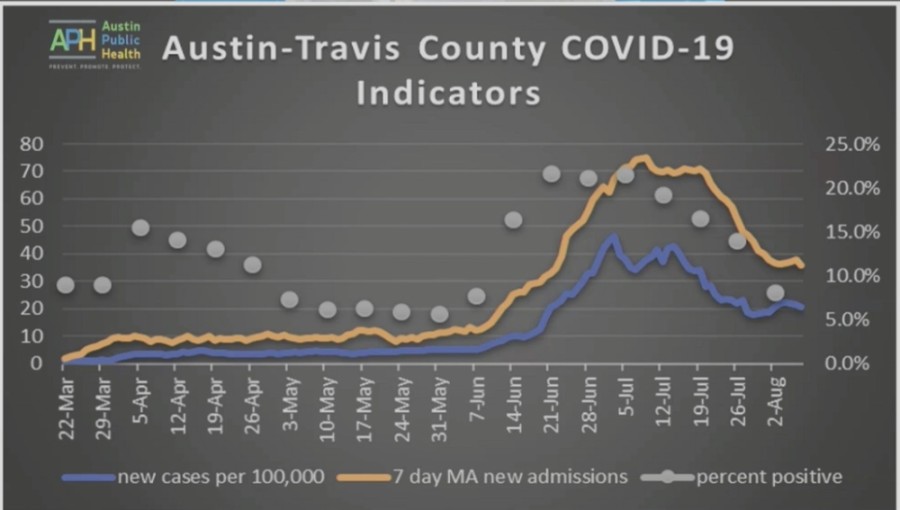 Based on data provided by Escott, local positivity rates peaked around June 21 at 20%, weeks ahead of when both new daily cases and the seven-day moving average of new hospital admissions peaked in early July. As of Aug. 2, that positivity rate is between 5% and 10%.

However, Escott said some improvements in reporting time are needed before APH can rely on the new metric, especially if there continues to be a lag time between when tests are conducted and when results are reported to APH from third-party offices and labs. In the meantime, he encouraged the public to take advantage of public testing through APH’s coronavirus testing portal.

“We are seeing what’s being seen in many parts of the country right now, and that’s a significant decrease in the testing being done,” Escott said.

“This is not because less tests are available. It’s because less individuals are signing up for testing,” he said.