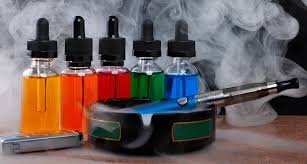 E-liquid is also known as e-juice, is the liquid that goes inside your e-cigarette or vape.

Vaping is something that has risen in popularity in recent years, and you would be hard pressed to walk into a shopping mall or down a high street and not pass one or several vape shops.

There has been much confusion about what is, and what isn’t in an e-liquid, leading to lots of scaremongering.

Let’s take a look at how e-liquid is made, and what goes into it.

E-liquids are not a quick thing to make, and the process can take some time. The ingredients have to be measured out exactly, and added at the right time, much like baking, to achieve the desired, and safe, outcome.

The base of E-Liquids are made of either vegetable glycerine or propylene glycol, but usually a mixture of both, and the flavourings are added to this base in whatever quantities desired to give the desired flavour and taste.

After the flavourings, nicotine is added. E-liquids have different levels of nicotine to suit the customer, and some have none at all. The liquid is then thoroughly mixed together.

This liquid is then left to sit from a minimum of twenty four hours, to several days depending on how flavoursome you want the liquid to be.

What Is Vegetable Glycerin?

Vegetable glycerin, or VG makes up the biggest volume of the liquid in an e-liquid, and is responsible for the large volume of white vapour you see appearing from car windows when someone inside is vaping.

Vegetable glycerin comes from vegetable oils – usually coconut oil or soy beans, but it itself is not an oil, it is an alcohol. It is quite thick though, so older designs of e-cigarette liquids have less vegetable glycerin in them.

Vegetable glycerin is not toxic, and has been used in foods or medicines for many years. It doesn’t have an odour, and it doesn’t have a colour to it.

What Is Propylene Glycol?

Propylene Glycol is also an alcohol, and is colourless and odourless. What makes it different to vegetable glycerin, is that it has no taste and it is lower in density.

Being flavourless, it means it can be used as a base for all flavours, and won’t add an extra sweetness like vegetable glycerin will.

The fact that it is thinner than vegetable glycerin makes it more suitable for older models of e-cigarette, and it also makes your e-cigarette much easier to clean.

Propylene glycol does not produce as much vapour, so for those who like to have large plumes of white smoke behind them as they vape, you will want a flavour higher in vegetable glycerin.

However, if you prefer to be much more discreet when using your e-cigarette, then a higher propylene glycol content would suit you better.

What Flavourings Are Used?

The flavourings are generally the favorite thing about e-cigarette, and there are so many varieties available to the discerning vaper.

The flavouring ingredients that are used, are generally food grade flavourings. However, this doesn’t mean that any old vanilla extract from the grocery store can be added to the liquid. Just because something is safe to eat, does not mean that it will be safe to inhale.

The food additives have gone through many rounds of rigorous testing to ensure they are safe to be breathed in.

If you are someone who likes to add their own flavourings, then talk to your local vape shop, they can point you in the right direction of where to buy flavourings that are safe, and won’t do you harm.

How Much Nicotine Is Added?

This totally depends on what the customer wants. E-liquids come in a whole range of different strengths, and some have none at all.

This is what makes vaping so useful for someone who wants to give up smoking. You can gradually reduce the amount of nicotine in the liquid until you are on zero percent.

Which E-Liquid Should You Choose?

Always buy your e-liquids from a professional vaping shop. It is very easy to find cheap liquids online on auction sites, or being sold from an unauthorised shop.

If something seems too good to be true, then it probably is. E-liquids that do not properly conform to safety standards of that country could be made from ingredients that will harm you, so always go to an authorised retailer.

A person who works in a vaping shop will also be able to talk to you about your requirements that you want from an e-liquid, and will allow you to taste liquids before you buy, so that you’re not spending money on a product you may not use more than once.

Is Vaping Better Than Smoking?

The short answer here is yes. Vaping is better than smoking, because the smoke produced by traditional cigarettes contains very harmful chemicals.

Traditional cigarette smoke has a very high percentage of carbon monoxide, which is not healthy for anyone. A big problem with traditional cigarettes is that they not only do harm to the smoker themselves, but they also cause harm to others in the form of passive smoking.

Carbon monoxide is also incredibly harmful to the environment, so any way that we produce less of this gas can only be good.

E-cigarettes are not completely harmful chemical free, but they are far less harmful than traditional cigarettes.

E-cigarettes are very useful in helping people who want to quit smoking, or smoke less, and therefore e-cigarettes have a role to play in making people healthier.

E-cigarettes will continue to be very popular, and as we become more health conscious in general, more and more people will move away from traditional cigarettes to e-cigarettes.

Enjoy your e-cigarette, and always make sure to buy your liquids from an authorised outlet.