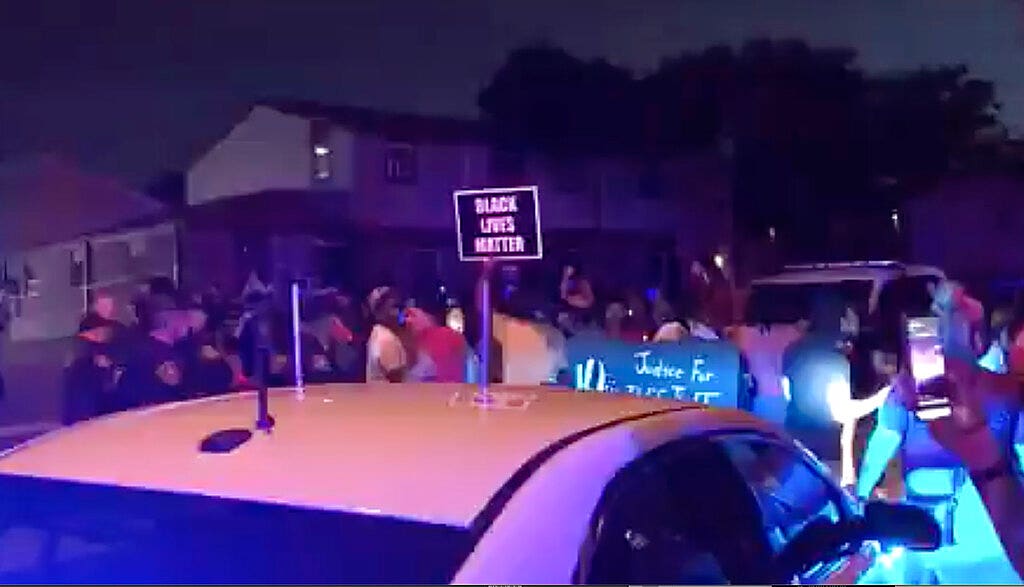 A police officer-involved shooting on Sunday of a Black man who was shot in the back set off violent protests in the lakefront city of Kenosha,Wis., that have lasted into the early hours Monday.

Many details of the shooting were not immediately clear, but the following unrest prompted the city to issue a curfew until 7 a.m. on Monday and police asked businesses to consider staying closed “due to numerous arm robberies and shots fired calls.”

“What we know for certain is that he is not the first Black man or person to have been shot or injured or mercilessly killed at the hands of individuals in law enforcement in our state or our country,” he said. Evers promised that there will be accountability.

Kenosha is the latest city to see unrest amid widespread protests after George Floyd died in police custody in May.

The Milwaukee Journal-Sentinel reported that police were dispatched on a domestic violence call at about 5:11 p.m. prior to the shooting. The report said that officers administered aid to Blake, who was airlifted to Froedtert Hospital in Milwaukee.

Julian Castro, the former 2020 Democrat presidential hopeful,  retweeted a purported video of the shooting that appeared to show officers yelling at Blake as he tried to walk around an SUV and get into a driver’s side seat. One of the officers appears to hold Blake by his shirt and open fire.

“Police in Kenosha, Wisconsin appear to shoot a man seven times in the back at point blank range after he ignores commands,” Castro tweeted. “We’re (sp) no other non-lethal methods considered, @KenoshaPolice?”

The Journal-Sentinel reported that a large crowd appeared at the scene and small fires were set in the street. One video purported to show a police officer knocked out during a protest. One person could be heard saying, “He got bricked.”

Marchers also headed to the Kenosha County Public Safety Building, which authorities had mostly blocked off. Protesters marched along lines of cars honking on their way to the station and eventually made their way to the rear parking lot. A man could be seen breaking the window of a patrol car parked along the street. Some police officers were positioned on the roof of the station as people continued toward the building.

Outside the station, protesters faced off with officers who were dressed in riot gear that included plastic facemasks and held plastic shields and batons that they occasionally used to push people back.

News reporters at the protest posted videos of a dump truck on fire and confrontations between police and protesters. The paper reported that a fire was set outside the city’s courthouse, which was also graffitied.

The police department issued a statement confirming the shooting and said the sheriff’s department and Wisconsin State Patrol have taken over the scene. The state’s Department of Justice and its Division of Criminal Investigation will investigate the shooting.

GET THE FOX NEWS APP

“Things have been very heated, tons of damage to cop cars, an officer was actually knocked out,” one person filming said, according to the paper.

The Associated Press contributed to this report