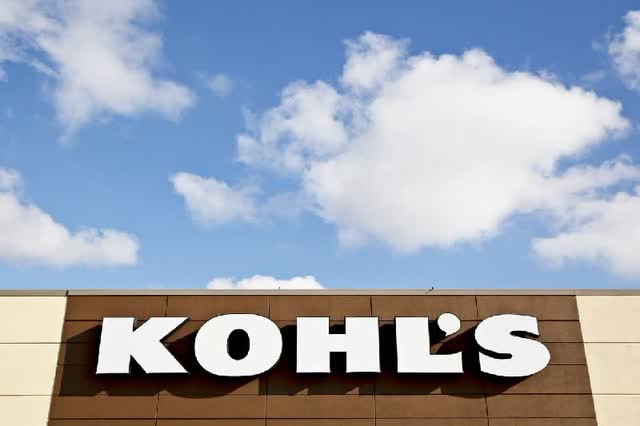 The coronavirus has practically brought the U.S. economy to a standstill, hurting retailers, in particular. Several traditional retailers were struggling prior to the pandemic, including Kohl’s (KSS). The company reported quarterly revenue of $3.41 billion, down 23% Y/Y. Results were negatively impacted by temporary store closings. Stores operated about one-fourth fewer days than the year-earlier period. In late March, the company temporarily closed all stores and generated the lion’s share of sales online. Kohl’s also furloughed 85,000 store and distribution associates in order to save money. In early May, the company began reopening stores. As of August 1, 2020, all stores were reopened and many associates returned to work.

The quarter tested the strength of the company’s digital operations. They passed with flying colors, growing revenue 58% Y/Y:

May was the most challenging period in the quarter as a majority of our stores were closed for most of the month. We saw a strong rebound in June with the vast majority of our stores reopened and digital’s momentum remaining. However in July, we did experience some sales deceleration from June strength, as COVID concerns heightened in areas of the country where cases have been escalating. We also saw a softer start to the back-to-school selling season, given increased uncertainty around kids returning to school.

So, all in for the quarter, store productivity for reopened stores was approximately 75%. We are pleased that digital sales remains strong in the quarter, increasing at 58%.

Kohl’s will have to continue to lean on its digital operations until the pandemic subsides. However, the fact that revenue growth decelerated in the month of July could be cause for concern. Revenue growth early in the quarter could have been driven by pent-up demand. What happens after pent-up demand subsides? Secondly, holidays and the back-to-school season are key sales periods for Kohl’s. If millions of school children remain at home amid virtual learning, then it could hurt back-to-school sales for the retailer.

The decline in scale hurt margins. Gross margin was 33.1%, down over 550 basis points versus the year-earlier period. The mix of business was heavily weighted towards digital sales, which hurt margins. Higher distribution costs related to digital sales also weighed. Gross profit on a dollar basis was $1.1 billion, down 34% Y/Y. SG&A expense was $1.1 billion, down 17% Y/Y. The decrease was driven by a reduction in store expenses due to store closures and lower marketing expenses. As a percentage of revenue, SG&A was 31%, up from 29% in the year-earlier period.

The fallout was that EBITDA of $335 million declined 45% Y/Y. EBITDA margin was 10%, down 400 basis points versus the year-earlier period. Certain retailers reported an EBITDA loss during the quarter. The fact that Kohl’s generated positive EBITDA could be considered a major victory, in my opinion. If sales in the following quarter remain flat to declining, then the company’s EBITDA margin could remain depressed.

Maintaining liquidity is paramount for retailers in this environment. Kohl’s has cash of $2.4 billion, up from $625 million in the year-earlier period. Like competitors, Kohl’s has raised debt to shore up liquidity. Working capital was $3.1 billion, up from $1.8 billion in the year-earlier period. Kohl’s reduced inventory to $2.7 billion, about $1.0 billion less than last year. The company must continue to pare its inventory balance to help drive free cash flow (“FCF”).

FCF for the first six months of the year was $108 million, versus $237 million in the year-earlier period. Positive FCF could lead to an increase in liquidity over time. Kohl’s also sold $193 million of real estate this year and suspended its dividend payments. These were smart moves on the company’s part, as it is still unknown how long the pandemic will last or how long the economy will remain in recession territory.

Kohl’s has a debt load of $3.5 billion, up from $1.9 billion in November. Debt is currently less than 2x last 12 months (“LTM”) EBITDA. If EBITDA declines from here, then the company’s credit metrics could be cause for concern. For now, its debt load appears to be manageable.

I also run the Shocking The Street investment service as part of the Seeking Alpha Marketplace. You will get access to exclusive ideas from Shocking The Street, and stay abreast of opportunities months before the market becomes aware of them. I am currently offering a two-week free trial period for subscribers to enjoy. Check out the service and find out first-hand why other subscribers appear to be two steps ahead of the market.

Pricing for Shocking The Street is $35 per month. Those who sign up for the yearly plan will enjoy a price of $280 per year – a 33% discount.

Disclosure: I/we have no positions in any stocks mentioned, and no plans to initiate any positions within the next 72 hours. I wrote this article myself, and it expresses my own opinions. I am not receiving compensation for it (other than from Seeking Alpha). I have no business relationship with any company whose stock is mentioned in this article.