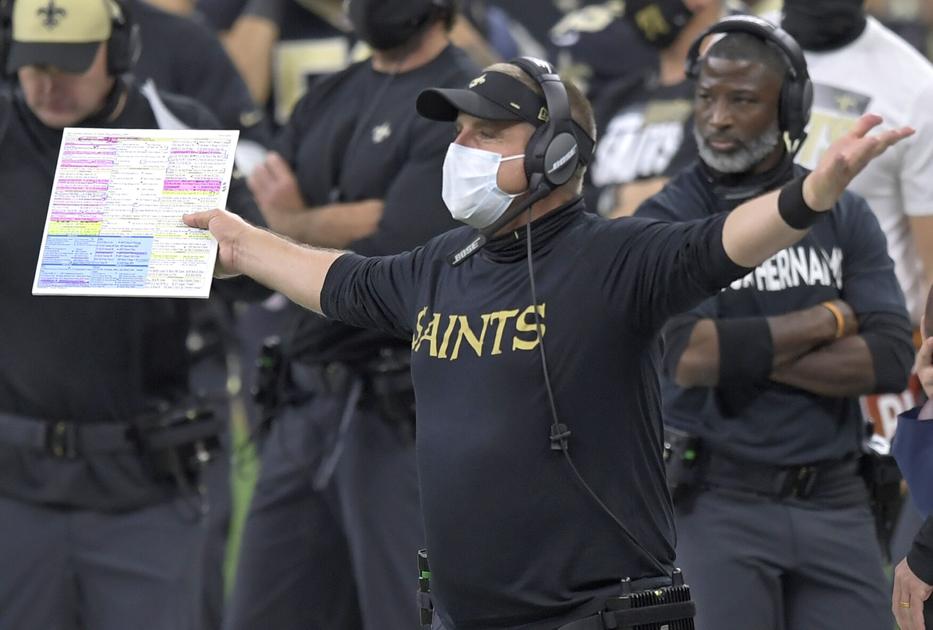 DETROIT — On Thursday, New Orleans Saints coach Sean Payton echoed his sentiment from a few months earlier in regard to potential coronavirus outbreaks across the league.

“We’re going to continue to have an occasional (issue),” Payton said. “It’s inevitable and you’re just trying to keep it to a minimum.”

At the time, though, he was speaking to the situation unfolding 500 miles north in Nashville with the Tennessee Titans.

But fast forward to Saturday: the issue hit close to home when fullback Michael Burton reportedly returned a positive coronavirus test after the Saints had already arrived in Detroit — presumably from his Saturday morning nasal swab.

And the big question is… what happens now?

A refresher on how the NFL’s coronavirus tests work

As it stands right now, NFL players, coaches and staffers test most days of the week, but they don’t routinely test on game day — which is part of the reason behind why the Tennessee Titans’ outbreak has concerned those in NFL circles.

For a normal game week, players, coaches and staffers get tested Monday-Saturday in the morning. They test on their Tuesday off-day as well. Those tests are typical nasal swabs — not the 6-inch nasopharyngeal swabs that were used around the world in the early days of the pandemic.

Those tests — for the Saints, specifically — get driven via courier to the BioReference Laboratories facility in Houston, which is a 348-mile drive.

There are several BioReference facilities serving the NFL’s swath of tests from its 32 teams, including one site in New Jersey that had an “isolated contamination” issue with several tests back on Aug. 22.

Typically, the Saints get their test results back in the early hours of the morning.

It is probable that the Saints received their Saturday test results back from the Houston BioReference lab a little earlier than normal, which is why the news regarding Burton’s positive test dropped just before 11 p.m. CT.

Full disclosure: select beat reporters that cover the Saints on a daily basis are tested during the week, too. The reporter who wrote this story is one of them, testing three days a week. For a Sunday game, those reporters get tested on Tuesday, Wednesday and Thursday ahead of Wednesday’s, Thursday’s and Friday’s practices. Reporters do not test when arriving at the stadium for games, but they do fill out questionnaires and have their temperature taken.

Since training camp started in July, those test results for media members have come in in the early hours of the next morning, anywhere between 12:30 a.m. and 3:30 a.m., so approximately 13 to 16 hours after getting tested.

Originally, NFL teams were only going to test almost daily through the first two weeks of training camp, but that has been extended twice. Now, teams are testing six days a week for the indefinite future — something that doesn’t look likely to change as more positive tests are cropping up around the league.

After fine, Sean Payton admits he needs ‘to be more diligent’ with face covering during games

What’s the protocol when a player tests positive?

A different protocol goes into place when a player tests positive for COVID-19.

When Burton’s test result returned positive, he and those around him during travel tested again. Seven Saints players in addition to Burton, according to Pro Football Talk, needed to undergo additional testing after contract tracing determined they were within six feet of Burton for an extended period of time while traveling. One of those seven, according to the report, was star running back Alvin Kamara.

Teams use Kinexon devices for that contract tracing, and the trackers to be worn during all team activities, including team travel.

The NFL protocols stipulate that the person who tests positive and all of their close contacts must be isolated until the results from their respective follow up tests come back.

Based on the NFL’s updated COVID-19 protocols, Burton received two additional tests on Saturday night. One of those was an additional nasal swab test — the same sort of test players undergo daily — and the other was a point-of-care test.

Since the Saints are on the road, it’s not known which lab their test results will be sent to. The Detroit Lions use the BioReference lab located in New Jersey for their daily testing.

If both of Burton’s tests return negative results, he will not be considered positive for coronavirus and may return normal activity.

If Burton’s tests return positive results, then there are a few ways that could go. The fork in the road here depends on if he’s showing symptoms.

If a player is symptomatically positive: They can return to the team after at least 10 days since symptoms first appeared; and at least 72 hours have gone by since symptoms were last experienced.

Now, back to the seven players who were reportedly in close contact with Burton. They all had to test again too and be isolated.

Now, that is likely a moot point if Burton’s tests return negative results. But if Burton’s follow up tests are positive, they’ll have increased symptom monitoring and will have daily point-of-care tests for the next eight days. Then, they’ll resume back to the regular testing schedule after day eight.

If the players who came within close contact of Burton test positive on their follow ups, then they’ll have to follow the same positive-test protocol as outlined above.

But therein lies a major wrinkle, as displayed by the Tennessee Titans this week. As of Saturday, they’ve had eight players and eight team personnel test positive for the coronavirus, but not all of them tested positive immediately.

Even though news of the Titans’ outbreak started swirling around the league on Tuesday, one player and two staffers first tested positive four days later on Saturday.

The Saints traveled before getting their test results back?

Technically, yes, but that’s how that works across the league. In order for players to be able to travel for a Sunday game, their Friday coronavirus test needs to come back negative.

Based on this, Burton’s Friday result was likely negative, meaning there was no immediate concern when he boarded the Saints’ flight to Detroit on Saturday. The red flags popped up after the team arrived in Detroit because the tests don’t give instantaneous results.

The timing of this, though it may seem off, makes sense because the NFL prohibits teams from traveling on game days.

How the Saints are handling road games in 2020: ‘Buyouts’ of most hotels, more buses than usual

The NFL/NFLPA’s protocol for road games

The Saints are dealing with this on the road, as Burton’s positive result came back when they were already in Detroit ahead of their scheduled Week 4 game against the Lions.

The NFL and the NFLPA encourage teams to take two charter planes to road games, but that’s not a mandate. What is a mandate, though, is that teams must have at least one open seat between passengers.

The NFL also a private air-charter service on retainer this season, in the event someone does test positive and/or displays symptoms while on the road and needs to travel back to their home city without potentially infecting the rest of the team.

If they can, teams are encouraging having everyone stay in separate hotel rooms. Then buses used for teams — shuttling teams from the facility to the airport, the airport to their hotel, the hotel to the venue and to the inverse — are limited to no more than 50% capacity.

Additionally, teams must have at least three empty rooms at their hotels to be used for quarantining any member of the traveling party who displays symptoms or tests positive, but that’s not really an issue for the Saints because of how they’re traveling this season.

How the Saints travel

The Saints stayed at Wynn Resorts when they were in Las Vegas, and that was the only hotel the team didn’t completely buy out for their road games this season.

Because of that, the Saints have all the rooms at their disposal for quarantines when necessary for the rest of their season (if it still goes according to schedule).

Disclosure: These are affiliate links, meaning, at no additional cost to you, NOLA.com may earn a commission on purchases made via clicks on those links.