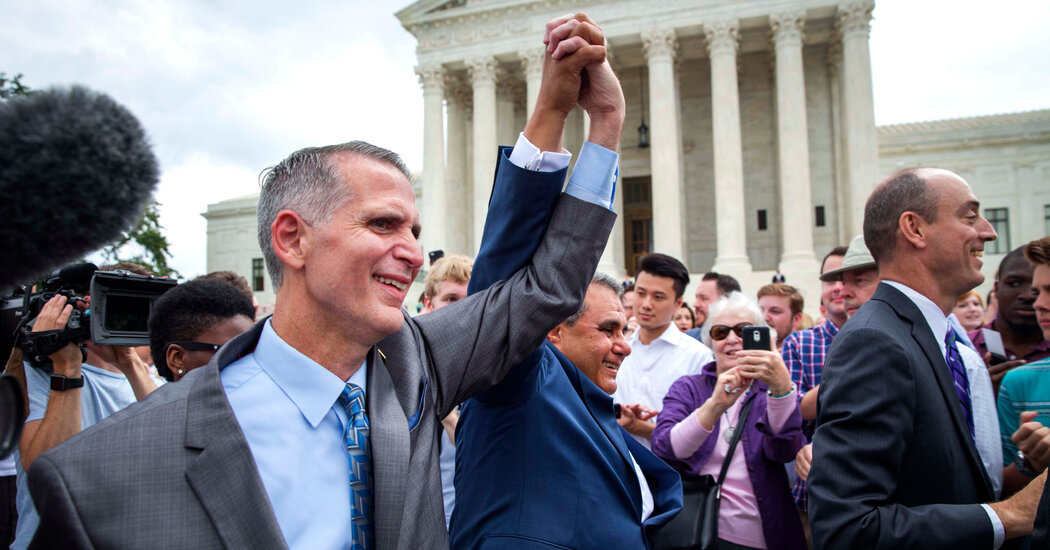 WASHINGTON — Justices Clarence Thomas and Samuel A. Alito Jr., who dissented from the Supreme Court’s 2015 decision establishing a constitutional right to same-sex marriage, appeared to urge the court on Monday to reconsider the ruling, which they said had invented a right with no basis in the text of the Constitution.

“By choosing to privilege a novel constitutional right over the religious liberty interests explicitly protected in the First Amendment, and by doing so undemocratically, the court has created a problem that only it can fix,” Justice Thomas wrote, in an opinion joined by Justice Alito.

The justices issued their opinion in a case concerning Kim Davis, a Kentucky county clerk who had been sued for refusing to issue marriage licenses to same-sex couples. The Supreme Court turned down her appeal, and the two justices concurred in that decision, saying the case did not cleanly present questions warranting the court’s review.

But they used the occasion to issue a four-page statement denouncing the harm they said the 2015 decision, Obergefell v. Hodges, had done to religious freedom.

“Due to Obergefell, those with sincerely held religious beliefs concerning marriage will find it increasingly difficult to participate in society,” Justice Thomas wrote, adding that the decision had stigmatized people of faith.

“Obergefell enables courts and governments to brand religious adherents who believe that marriage is between one man and one woman as bigots, making their religious liberty concerns that much easier to dismiss,” Justice Thomas wrote, adding, “In other words, Obergefell was read to suggest that being a public official with traditional Christian values was legally tantamount to invidious discrimination toward homosexuals.”

“Since Obergefell,” he wrote, “parties have continually attempted to label people of good will as bigots merely for refusing to alter their religious beliefs in the wake of prevailing orthodoxy.”

The Obergefell case was decided by a 5-to-4 vote. The other two dissenters were Chief Justice John G. Roberts Jr., who did not join Justice Thomas’s opinion on Monday, and Justice Antonin Scalia, who died in 2016.

James Obergefell, the lead plaintiff in the 2015 case, said Monday’s opinion was “deeply disturbing and upsetting.”

“Justices Thomas and Alito seem to imply that freedom of religion carries more weight, is more important, than all other rights,” Mr. Obergefell said.

James Esseks, a lawyer with the American Civil Liberties Union, said the justices’ statement was shocking.

“It is appalling that five years after the historic decision in Obergefell, two justices still consider same-sex couples less worthy of marriage than other couples,” Mr. Esseks said. “When you do a job on behalf of the government — as an employee or a contractor — there is no license to discriminate or turn people away because they do not meet religious criteria.”

Next month, the court will hear arguments about the role religious objections can play in excluding same-sex parents from a foster care program.