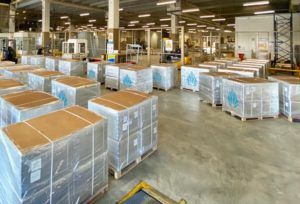 The news sheds light on the final destination of large exports quietly shipped from Uruguay to Portugal at the end of 2019 and earlier this year, as first reported by Marijuana Business Daily. The shipments’ final destinations were unknown at the time.

But the latest development shows the product ultimately was headed to Germany.

Frank Farnel, director of government and public affairs for Tilray in Europe, confirmed to MJBizDaily that the flower was:

This seems to indicate that it is possible that flower grown and harvested in a facility with no EU-GMP certification can be sold in Germany under some circumstances.

In this case, the flower was harvested in Uruguay and then processed at an EU-GMP-certified facility in Europe, with the batch release certificate signed by Tilray’s Portugal qualified person in charge of overseeing compliance with GMP.

MJBizDaily was able to review the batch release certificate.

This news also provides an answer to the question of what happened with some or all of the huge Uruguayan exports to Portugal at the end of 2019 and in mid-2020.

Earlier this year, MJBizDaily reported that a shipment of 1,000 kilograms (2,200 pounds) had been sent to Portugal at the end of 2019.

Uruguay-based licensed cultivator Fotmer Life Sciences acknowledged being the producer and exporter, but Tilray was the only Portuguese-licensed producer that declined to comment on whether it was involved with the import.

Because no Portuguese company has obtained the necessary approvals to sell medical cannabis to domestic patients, MJBizDaily called the huge import into Portugal “unusual … unless it was destined for another country.”

Shortly after, Fotmer exported a second, even larger, shipment from Uruguay to Portugal in May.

The first shipment of flower was exported from Uruguay for a declared value at customs of about $3.20 per gram. The second was $2 per gram.

Tilray is offering the flower to German pharmacies for roughly 9.50 euros ($11) per gram.

As noted above, Tilray’s new offering indicates it is possible to sell flower in Germany that was not harvested in a EU-GMP certified facility.

The product in this case went through an EU-GMP-certified facility after harvest but before reaching the German market.

The overlap between Good Agricultural and Collection Practice (GACP) and GMP, particularly for the drying step, has created some confusion in the cannabis industry.

“Individual steps such as cultivation, collection, harvesting, cutting or drying do not fall under GMP but (does fall) under the GACP regulations as long as these activities take place in the field,” Dr. Maik Siebelmann, the “qualified person” and head of division pharma at Wessling GmbH, a German testing laboratory and consulting company, explained to Marijuana Business Daily.

However, he added, “all further steps of cutting, trimming and drying are subject to GMP Part 1 for medicinal products or Part 2 for active pharmaceutical ingredients (APIs). The classification with regard to GMP Part 1 and Part 2 depends on the assessment of the local supervisory authority.”

In Germany, regional governments are responsible for interpreting and implementing many health-related issues, including those concerning the GMP requirements for medical cannabis. Sometimes they have differing views.

The District Government of Düsseldorf, the supervisory authority overseeing Tilray in Germany, interprets the rules to mean that GMP is not required until after harvest.

MJBizDaily asked the Düsseldorf government when in the flower production process the GMP certification must start.

According to a spokesperson’s response, “the cultivation and harvest of cannabis flowers are not subject to GMP monitoring and are therefore not the responsibility of the District Government of Düsseldorf.”

The Düsseldorf government, replying to a follow-up question about whether the drying process must be done in a facility with EU-GMP certification, said officials make legal assessments and statements only about specific business models of organizations based in its district.

Alfredo Pascual can be reached at [email protected]