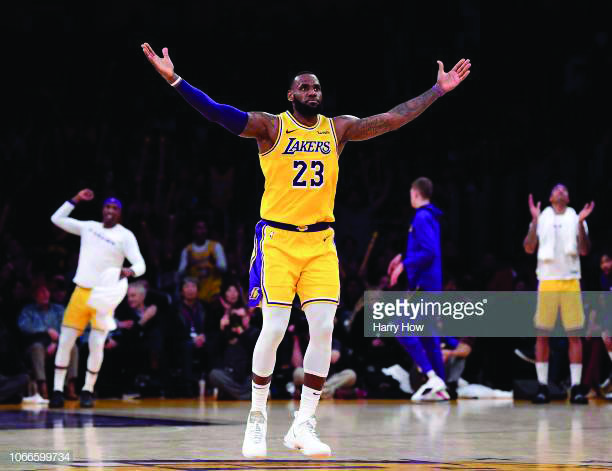 The Los Angeles Lakers and their 2020 NBA Run

In the 2018 offseason, NBA superstar LeBron James signed a 4 year 154 million dollar contract with the Los Angeles Lakers, leaving the Cleveland Cavaliers. The Lakers, who were once a championship team, weren’t the best before signing James. They had a losing record and were one of the worst teams in the NBA at the time being. The Lakers started the season hot and were actually ranked 4th in the western conference. Everyone thought finally we would get to see the infamous Lakers back in the NBA playoffs, but injuries said otherwise. James went down with groin injury, which was later determined as a left groin strain. He missed almost half of the NBA season, and the Lakers collapsed and went down till 9th, which is one seed away from the NBA playoffs. James himself came back in full force, on a mission to make the 2019 NBA playoffs. James was back, but the team was gone. They had emotional problems with each other, the team chemistry was destroyed, and their confidence and morale were ruined along with it. The Lakers ended up failing to make the playoffs and having a miserable season. LeBron James was on a mission, he knew he had failed the city of Los Angeles, most importantly the fans of the Lakers. James later tweeted, “I promise Laker Nation we will be back.”

The 2019-20 offseason has begun, which means many of the best players are free agents and can decide which franchise they want to join forces with. There are many best players for the Lakers to sign, but who do they want and who do they need to win an NBA championship. The Lakers had a goal to build an unstoppable super-team which no one could beat. One of the greatest teams of all time the Golden State Warriors had just recently split since they couldn’t win their third straight championship, so the Lakers were in full force. They wanted to get a player who would match perfectly with LeBron James. Their eyes were on the prize, Kawhi Leonard the reigning NBA champion and finals MVP, who took down the Golden State Warriors, was a free agent and you know the Lakers wanted him. The curiosity was building up what was going to happen with Leonard. In July of 2019 Kawhi Leonard announced he would be joining Los Angeles, not the Lakers, but the Clippers. The world was shocked by the most unexpected move a player could make, moving to L.A, but not joining the Lakers was shocking to every NBA fan. But the Lakers didn’t give up, they made move after move, and finally got something good. Anthony Davis, one of the best in the NBA to this day, he signed a 4 year 146 million dollar deal with the L.A Lakers.

As expected the Lakers were the number one ranked team right ahead of the Clippers. They were having an amazing season, due to the Warriors being out with injury, as well as the Brooklyn Nets. These two teams were supposed to be highly ranked teams but their star players were injured so they were no competition for the Lakers. The Lakers were expected to win the championship, despite the Clippers being there, the Lakers were still favorites to win it all. As still to this day the Los Angeles Lakers are dominating the NBA, the playoffs aren’t over, the finals are still in the midst, but as the Clippers are now officially eliminated the Lakers should have an easy run to win it all.