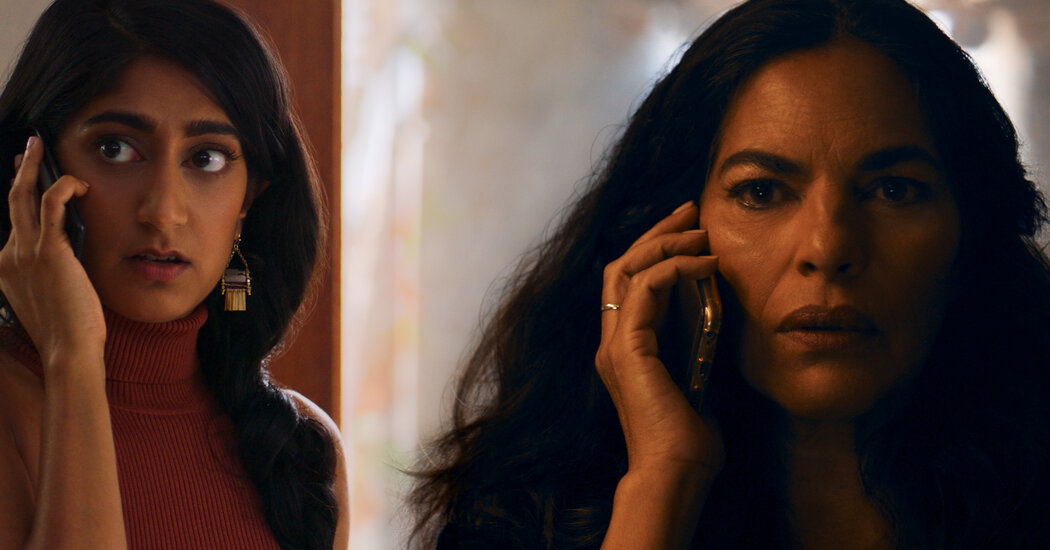 Want to feel old? In “Mississippi Masala” (1991), Sarita Choudhury played a young woman in America whose romance with a Black man scandalizes her tradition-bound Indian family. In “Evil Eye” she plays an Indian mom scandalized by her daughter’s romance. Time does fly.

But “scandalized” may be too mild a word. In Delhi, her character, Usha, has, conventionally enough, been pushing for her daughter Pallavi, who lives in New Orleans, to settle down. So, when Pallavi (Sunita Mani, late of “GLOW”) meets Sandeep (Omar Maskati), a man of both means and the preferred ethnic background, you’d think Usha would be thrilled. But she starts out distrustful and becomes terrified.

Usha is a deeply superstitious woman, who’s given Pallavi jewelry meant to ward off the “evil eye.” She consults with astrologers. And she’s haunted by vivid dreams and visions. Of abuse at the hands of a man, of death by drowning and more.

Eventually we become privy to the real-life trauma that drives Usha’s anxiety. But could her suspicions that Sandeep is somehow connected to the man who stalked her many years ago be true?

The directors, the twin brothers Elan and Rajeev Dassani, keep the tension percolating before letting loose with a final confrontation that is truly something to see, even though it doesn’t entirely cut it in the suspension-of-disbelief department.

Choudhury is excellent here as a fraught matriarch — as good as she was as a young rebel three decades back. And Maskati’s performance is a slippery mix of suave and menacing, which helps sell the farthest-fetched elements of this story.