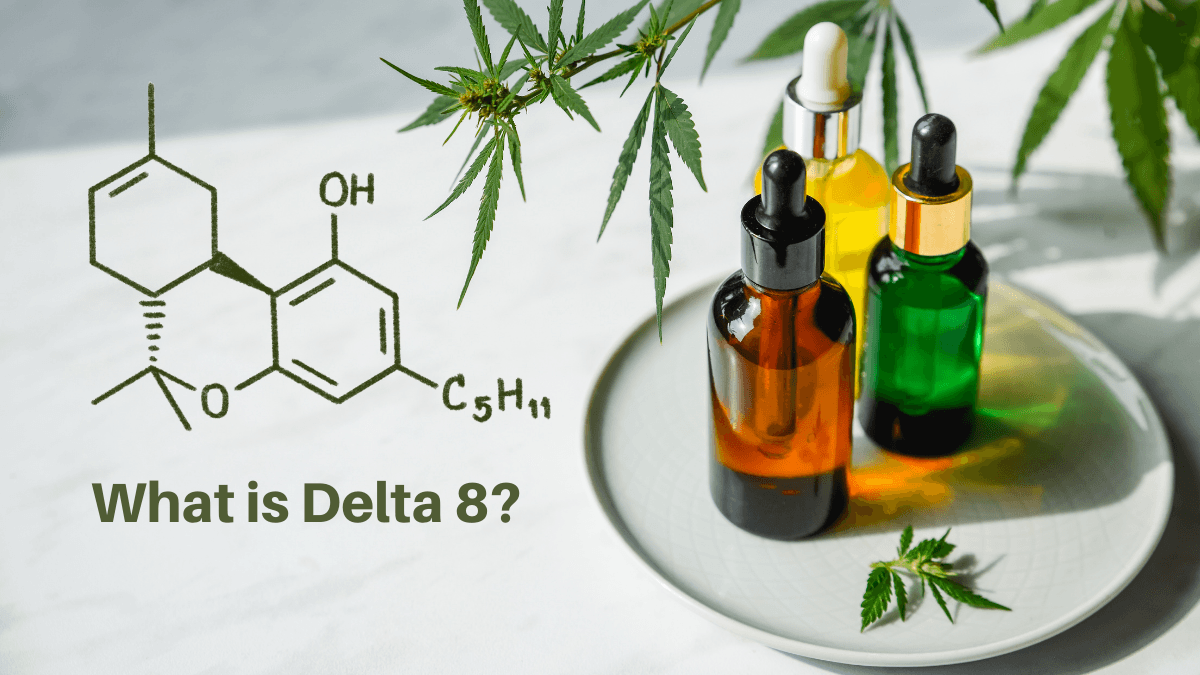 Delta 8, or Delta-8-THC, is a new supplement that hemp brands are making from CBD. But unlike CBD, Delta 8 will make you feel high.

Delta 8 supplements are a new class of product that are rapidly flooding the hemp market. While you may see them sold from brands that also sell CBD, these products create a very distinct sensation. Consumers that try Delta 8 feel stoned, making this more like psychoactive cannabis (“marijuana”) than CBD.

Because these supplements come from legal industrial hemp, Delta 8 supplements may be legal to possess anywhere in the United States. Many experts think this is a legal loophole that the government will close very soon.

“Law enforcement and regulatory bodies don’t necessarily like it when you exploit loopholes that can get people high,” commented Jordan Lams, founder of Moxie Seeds and Extracts.

Lams, who has over decade’s experience in the cannabis and hemp industries, helped us understand this substance.

For now, Delta 8 products are widely available. We thought it was important to create this guide to help you understand this new cannabinoid, how it’s made and how to safely use it, if you choose to try it.

While we suspect Delta 8 is safe to use like other forms of cannabis, we didn’t want anyone to try it without realizing how it differs from CBD.

What is Delta 8 And How Does It Make You Feel?

Most Delta 8 is made from hemp, and often sold by CBD companies. If you look at the marketing for these products, it’s not always clear what you are getting into.

For legal reasons, most companies won’t openly advertise the fact that Delta 8 gets you stoned.

Rather than CBD, Delta-8-THC is much more similar to Delta-9-THC. Commonly just called THC, this is the main active ingredient found in psychoactive cannabis (“marijuana”). When consumed, it can cause euphoria, relaxation, pain relief along with giddiness, creative moods, or even potentially make you more anxious … In other words, Delta 8 causes most or all of the effects commonly associated with the regular form of THC.

Delta 8 is made from hemp but, unlike CBD, it will get you high.

The chemical differences between the two forms THC are very small, and they both interact with receptors in our brain and nervous system (the “endocannabinoid system”). For more information, look at our article which compares CBD and THC.

Some people do experience slightly different effects. We asked our readers on Twitter, and looked at some consumer reports on Reddit. Many people report feeling more of a physical, “body high” from Delta 8, with less of the mental effects of THC/marijuana.

“My experience with it has been very pleasant, from a consumption standpoint,” said Lams.

Remember though, experiences vary a great deal from person to person.

If you’re new to sensations of feeling high, we recommend you proceed with caution … First, however, we want to address whether these products are safe.

We prefer to recommend plant-based compounds. The process of transforming one cannabinoid into another sounds unnatural, but Lams said that’s a misconception. To create Delta 8, chemists expose CBD extract to a process called isomerization.

“It’s not a scary process with a lot of chemicals,” said Lams. “It’s really just manipulation of the chemistry through heat and pressure.”

Chemists working in the legal cannabis industry have been creating Delta 8 from regular THC for a while, but using CBD is relatively new.

“The onset when you take too much can really be overwhelming.”

Even so, hemp brands “quickly scaled up the ability to do isomerization,” he continued. “So the chemical purity of the products they’re converting from CBD … it’s pretty good stuff.”

Cannabis has a very long history of use without any fatal overdoses. So Delta 8 is probably physically safe to consume. Of course, we’re not doctors, and there’s a chance it could interact with prescription drugs or other substances. In addition, getting high causes significant mental changes that make it more dangerous to drive or perform other risky activities.

Probably the biggest risk is that inexperienced users might take too much and have mentally challenging experiences.

“I do know of a couple of different people that were inexperienced THC users that used Delta 8 and ended up having an adverse overdose and checking themselves into hospitals,” cautioned Lams. “The onset when you take too much can really be overwhelming.”

In other words, they probably weren’t in physical danger but were mentally very overwhelmed.

After the government legalized hemp at the end of 2018, lots of people grew hemp and produced raw CBD extract. Too much of it! Combine a glut of raw CBD, with a potential legal loophole allowing brands to sell mind-altering substances, and you can see why lots of brands are experimenting with this.

Lams compared this substance to kratom, which is under threat by the government, and salvia, an herbal psychedelic which got banned after widespread use. “If you look historically at attempts to utilize loopholes to commercialize psychoactive products, that doesn’t typically go well.”

A consumer using Delta 8 products is still going to face serious charges if they get caught driving impaired or otherwise put people at risk.

“In the eyes of the average public safety official, they’re not going to be able to tell the difference.”

Most field tests used by police probably won’t be able to tell the difference, either.

Lawyers seem divided about whether Delta 8 is legal at all. The CBD industry is unregulated, and there isn’t much precedent for this kind of thing in the hemp world.

“It’s such a polarizing legal issue that I think it will be addressed swiftly,” Lams said.

How to purchase and use

We don’t plan on reviewing or recommending individual Delta 8 products, at least until its legal status becomes clearer, but our usual advice for picking products will help you make the right purhase.

When it comes to dosing, ‘start low and go slow.’

Never buy Delta 8 from a gas station or other disreputable location. Only purchase from brands that are transparent about their sourcing, manufacturing process, and offer third-party lab results. These lab results should verify the strength of the product and its purity, showing you that it’s free from contaminants like pesticides, mold and heavy metals. The date on the test results should be recent (ideally 6 months or less) and the brand should carry out new tests on every batch.

Even though their effects are very different, Delta 8 supplements are used in much the same way as CBD. Most commonly, you’ll find tinctures, edibles like gummies and vape cartridges.

When it comes to dosing, we recommend that you “start low and go slow.” Begin with a very low dose, especially if you are inexperienced. Consider taking half a dropper full (or less) of tincture. Split strong edibles into pieces.

A vape or tincture will usually take effect more quickly than an edible. Sometimes people take too many edibles beause they think it’s “not working.” In reality, it’s just working slowly and can build up dramatically over time.

If you do take too much Delta 8, remain calm and remember the sensations will pass. The same advice people give for getting over feeling too stoned applies here: stay calm and hydrated, make yourself comfortable, and find pleasant ways to distract yourself until you sober up.

The future: Will the government ban these products?

If we’ve seemed harsh towards Delta 8, it’s because we don’t want someone stumbling into these products without the proper education. Lams stressed that Delta 8 can benefit people, just like the more common form of THC.

“Having access to something that can provide a different type of therapy, for those seeking medicinal relief, it could be really great.” He said. “More access is important for scientific research.”

Yet it’s a form of relief which could disappear at any time. He doesn’t think this will threaten the CBD industry as a whole. It’s likely to be dealt with in a “standalone” way. Still, the future is uncertain.

He continued, “I don’t believe this should be a criminal issue, when the overall regulatory framework is so new.”

Even so, it’s possible that we could even see police raids against establishments selling Delta 8 and other serious consequences for the people who manufacture and sell these products.

We’ll continue to update this article as this fast-moving issue develops.