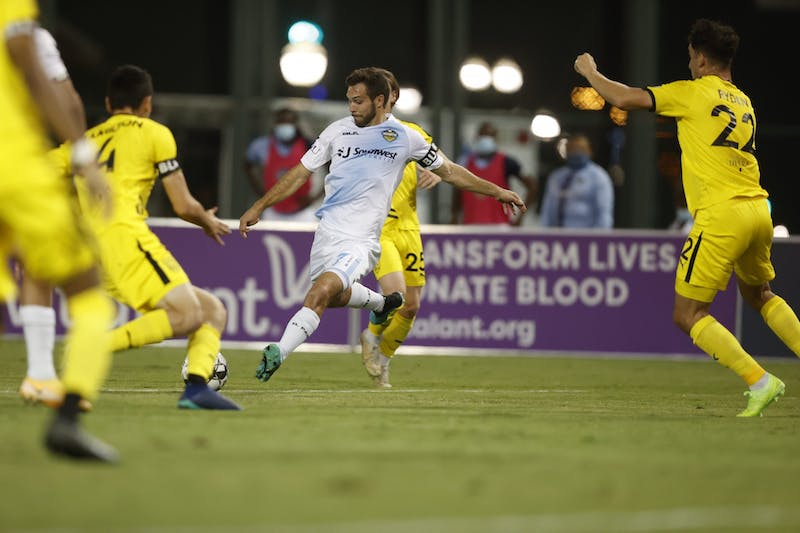 After 240 minutes of overcoming USL Championship postseason adversity in the role of the underdog — as indeed it has been all year for a homesick, road-weary club — New Mexico United finally found its kryptonite in the form of its neighbors to the south.

The Texas outfit was minutes away from continuing a remarkable two-year run of playoff success when Romeo Parkes, a Jamaican international striker signed on loan over the offseason, stunned the hosts in the fifth minute of stoppage time at Southwest University Park with a superb, low goal from 25 yards that made its way through traffic and past a diving, dumbfounded Logan Ketterer.

It would be Parkes, however, who in the span of half an hour turned from hero to scapegoat, as his fourth-round penalty take was saved easily by El Paso keeper Ketterer. Defensive midfielder Distel Zola sealed the victory by placing his shot composedly past United goaltender Cody Mizell.

El Paso secured its second straight berth in a Western Conference final — after falling to eventual champions Real Monarchs SLC in the penultimate match of 2019 — with a combination of punishing first-half pressure and a heavily fortified defensive shape to very nearly close out the final 45 minutes.

And in the end, much to the chagrin of all teams who see their postseason aspirations slip away in the cruel grip of penalty kick chance, it took a dose of bad luck for head coach Troy Lesesne and his club to finally derail a magical season.

Indeed, it was always going to be an uphill battle for New Mexico, whose final match of 2020 was its 17th consecutive game outside of state lines.

<!–/*
oncampueWEB
Video Tag (responsive design)
InContent Expandable Tag (Responsive Design) – The tag will recognize the operating system of the device and resize the video player to 300×250 and pull the mobile targeted content when a mobile device is recognized.
Copy and place ad tag been two

tags on article template page. The placement should appear just “below-the-fold”, meaning that a user needs to scroll down slightly to see the video. Be sure that if your article page also has an “inline” ad unit that plays within the text that the two ad units do not overlap.
Please call Will Dunning at 617-523-9802 if you have any questions.
*/ –>

United avoided a catastrophic opening 10 minutes after a trickling ball through Mizell’s box tangled itself between the legs of captain Josh Suggs just feet from the goalmouth before he was able to jab it away. High and heavy pressure from Lomotive intensified, and a series of corner kicks in rapid succession were only just kept at bay by United’s back three.

Forward Dylan Mares found the only goal El Paso thought it would require in the 30th minute. After Amando Moreno was dispossessed by Locomotive midfielder Ritchie Ryan near midfield, Mares’ overlapping run down the left flank landed at the end of a pass from Aarón Gómez. A quick cut inside just into the top of the penalty area set Mares free from two defenders, and a slashing right-footed shot from 17 yards to the top right corner sent Mizell into a diving save attempt that was nothing if not futile.

Inadvisable, low-percentage long balls and a failure to string together a set of passes long enough to maintain a steady tempo doomed United from breaching Ketterer’s line in the first half. It was only through the composure of the Las Cruces-born Suggs that United was able to listen to Lesesne’s halftime sermon only a goal down.

The distribution of possession in the first half was negligible, as New Mexico held onto the ball for just over 48% of the run of play. The key difference from the opening 45 minutes was laid bare in United’s inability to muster the creativity needed to break through El Paso’s stiff back line — New Mexico didn’t manage a single shot on goal and nearly tripled Locomotive’s 4 fouls conceded with 11 of its own.

The second half, on the other hand, bore little resemblance to the first: A neutral fan couldn’t be faulted for speculating whether or not Lesesne assembled an entirely different team in the same kits as the listless squad on display in the opening interval.

A slow, deliberate pace marked New Mexico’s return to play, with sustained possession and crisper passing gathering more chances as the visitors provided ever-more entertaining technical sequences. And yet, it was El Paso again who produced the more satisfying results until the last half-hour.

A cross from Macauley King found the head of Adrián Gómez in the 64th minute, but the 26-year-old’s header from close range went directly into the arms of Mizell.

The final 30 minutes of regular time produced a wealth of quality chances for New Mexico as head coach Mark Lowry’s side sat deep in defense and looked to remain resolute despite an ever-increasing creativity. Parkes’ last-minute score sent United players and staff into delirium and the match into extra time, but in spite of increased urgency from both sides the penalty kick sequence decided the winner.

What’s Next For New Mexico?

Parkes — despite the penalty miss that eventually spelled the sunset of United’s remarkable, tenacious second season — gave New Mexico an injection of wild adrenaline and hope that will surely reverberate through the offseason and spill into 2021, where supporters, players and staff will hope to sustain a trajectory that has only gone north in United’s brief existence.

If sufficient progress has been made in battling the coronavirus to where it would be safe to attend matches in Albuquerque next year, all the better for a club and fanbase who have shattered records on and off the pitch.

Andrew Gunn is the copy editor and a senior reporter at the Daily Lobo. He can be contacted at [email protected] or on Twitter @agunnwrites