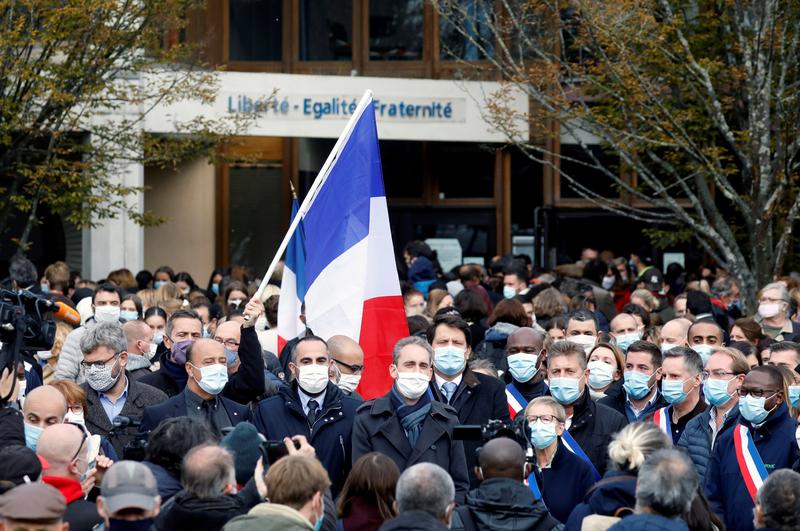 PARIS (Reuters) – Thousands of people gathered across France on Sunday to support teachers and defend freedom of expression after the killing of Samuel Paty, a history teacher beheaded by a suspected Islamist on Friday.

Prime Minister Jean Castex attended the gathering on Place de La Republique in Paris along with Education Minister Jean-Michel Blanquer and politicians from across the spectrum, showing solidarity after a killing that has shocked the country.

“You don’t scare us. We are not afraid. You will not divide us. We are France!” Castex tweeted later.

Paty, 47, was killed outside his school in a Paris suburb by an 18-year-old attacker. Earlier this month, the teacher had shown his pupils cartoons of the Prophet Mohammad in a class on freedom of expression, angering a number of Muslim parents. Muslims believe that any depiction of the Prophet is blasphemous.

The assailant, who was born in Russia of Chechen origin, was shot dead by police soon after the attack. Police have detained 11 people in connection with the killing.

People at the events on Sunday wore masks against COVID-19 and carried signs such as “Teaching yes, bleeding no” or “I am Charlie” in a reference to satirical magazine Charlie Hebdo, whose offices were attacked in a mass killing five years ago.

“We’re here to defend the Republic, the values of the Republic: liberty, equality, fraternity and secularism. We can feel that the nation is threatened,” Pierre Fourniou, 83, said in Paris.

Paty had been the target of an angry campaign on social media before he was killed. Castex said in an interview in Journal du Dimanche newspaper that the government is working on a strategy to better protect teachers from threats.

President Emmanuel Macron was due to hold a security meeting with key ministers later on Sunday, his office said.

A national tribute will be organised for Wednesday.